This fully realized sci-fi space drama beautifully realized by artist Dustin Nguyen cashes in on all of its previously offered potential with this excellent third installment. The first two volumes of this series centered on a 9-planet star system rife with humans and aliens 10 years after an unnatural apocalyptic event wasted large portions of the planets and populations. In that short-lived but huge event, planet-sized robots called Harvesters laid waste to carbon lifeforms. In its aftermath, the survivors declared genocide on all robots working and living within their interplanetary collective despite the lack of evidence that Harvesters and the system’s robots had any connection.

The story centers on a naive, pre-teenaged companion bot named Tim-22 that survived for the 10 years in a sleeplike charging state on an outer mining moon while the populous was evacuated during a poisonous gas leak. His human “brother,” Andy, evacuated, while his mother died on the moon. Tim-22 is wanted by both robot scrappers and the government for his potential link to the decade-old event.

The episode takes a smart step to the side. The component stories each tell the 10 year back story of many of the filler characters, and it’s fascinating. One could sense the richness of the world and its development beforehand, but now it’s laid out clearly and many characters have stepped up from being mere fillers. Expect the story to proceed forward again when the 4th installment comes out.

This series is highly recommended.

Liberty: Deception by Travis Vengroff
My rating: 4 of 5 stars 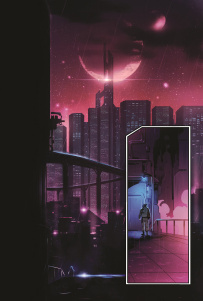 Stunning visuals lead the way with this dystopian graphic novel of a sci-fi off-planet society of sheltered “citizens” and starved “fringers” rumored to be barely human cannibals. The State-controlled media keeps a tight rein on its image, its heroes and its enemies of the State. It’s all propaganda with the biggest “hero” being nothing more than a glorified soap opera actor. That is, until his popularity makes him an extinguishable threat, too.

There exists a fantastic Liberty: Deception, Issue 0 showing the bleak life in the fringe. But this 1st issue follows the condemned actor using his fame and subterfuge to make his way out to the fringe. Along the way, he teams up with some of the previously introduced rogue fringers.

This series is highly recommended.

The Glad Hosts by Rebecca Campbell
My rating: 3 of 5 stars

The biological factoid that bacteria on and in one’s body outnumbers the body’s cells by 10 to 1 is ripe for speculation. One must wonder how integrated the organisms are. What choices are actually compromises for the super-organism that each body represents?

Amid a curious background landscape of a lovely off-world planet, this tale explores the super-organism of a human infected with an alien microorganism. The changes are not altogether unpleasant as the person reacts to the parasite morphing through many different life stages. Her very personality and psychology co-opt and adapt to the changes in a startlingly welcoming way.

This tale appears in The Year’s Best Dark Fantasy & Horror: 2016 edited by Paula Guran, I received directly from Prime Books. I’ve previously read this author’s “Unearthly Landscape by a Lady”.

Descender continues it’s exploration of political systems and issues of servitude and enslavement set among the stars. Nine planets, including one of post-Earth humans, have formed a loose alliance in the galaxy. The different races have varying abilities and strengths. However, planet-sized robots called Harvesters, decimated the system a decade ago leading the entire system into backlash and genocide against their artificially intelligent robots, ie robbies.

The series centers on Tim-21, a forever-10 years old companion bot who’s naive and likable. His sentimentality and programming draws him to humans even if they’re out to destroy him. And everyone is looking for him. Deep in his codex lies the key to the Harvesters . . .

Like many great series, a band of misfits representing different cultures and POVs band together around Tim-21 as others merely wish to wield him as a political tool.

Dustin Nguyen’s dreamlike watercolor artwork must be commended. Important images emerge from eerie, alien backgrounds while others are allowed to slip into the colorwash. However, fantastical races still show the details needed to convey otherness even when not in the forefront. The dreamlike quality exists throughout as if the atmosphere itself was bending the light. And yet, when a true dream sequence comes into play, the images depict that, too, even more loosely by erasing the panel lines themselves. These aren’t new techniques, but they’re masterfully handled.

At its best, sci-fi pushes and pulls against the achievements and possibilities of mankind and the very laws and limits of science itself. The laws of science, of course, are not like the laws of man however–they aren’t suggestions with consequences, they are hard and fast rules holding the fabric of the cosmos together as it expands. These are rules not meant to be broken, indeed, it shouldn’t even be possible lest the laws themselves are somehow wrong.

This tale pushes space travel to the extreme by following the very historic and selfish nature of mankind. Regular space travel is ok. Warp speed breaking Einstein’s predictions isn’t as it rips the delicate fabric of the cosmos. To heal the tears, a fee must be paid back in terms of energy and time–like a speeding ticket on a cosmic level. But that is a price some are willing to pay, if just to enjoy the thrill of the vaster universe and otherwise unreachable solar systems.

This tale follows Nuhane through many stages of his extremely, genetically enhanced long life as he and his mentor, and later his intern, hunt down the violators and exact the penalty of stasis for a length of time to off-set the damage done. That term often lasts for millions of years.

But even those enforcing the laws feel the thrill, and must pay the price . . .

One’s personal biography, the stories one tells oneself, slowly drifts over the years further from the objective truth. And then there are the lies one tells–stories meant to deceive others and not oneself. This is a tale of stories and a game in which the players try to determine which of a storyteller’s tales is the true one.

Near the end of the 21st Century, after most of the solar system has been colonized or at least exploited for resources, science allows people to create computer back-ups of themselves and to get high on another person’s memories. Both interestingly skew the concept of truth and deception when it comes to personal stories. In the first, memories can be edited out of a person if the back-up created pre-memory is engaged. In the second, false memories are implanted thereby created a problematic new personal truth.

The crew of the Tethys, a deep ocean hunting ship on icy Europa, likes to spend their downtime playing verbal games. Twelve and Tag is a verbal associative game. The second is a game to distinguish truth from lies. They use this second game to test out prospective new crew members by having them tell 2 tales under the categories of Saddest Moment, Worst Moment, or Weirdest Moment. One tale must be true, the other false. Everybody gets a vote . . .

With the prospect of discovering life–or better yet, intelligent life–beyond Earth, one of the biggest questions is how humans would communicate with it. We aren’t always the best at communicating with each other. Or even with other forms of life on Earth.

This Lovecraftian tale imagines the colonization of Mars and the discovery of life there in the form of a long-lived creature that undergoes metamorphosis through many vastly different forms from the swimming Naiad, bubble-talking juvenile stage to the dragonesque, flying imago stage in which all communication is electromagnetic resembling a mind-melding telepathy. Most individual attempts to communicate have failed or led to insanity, but some success has been found when groups of people neural link their own thoughts via a mysterious machine and elixir, and reach out to the creature . . .

The idea is intriguing, but the story suffocates under pages of veiled dialogues worthy of a British drama. Whereas, the action is relegated to the fringes.